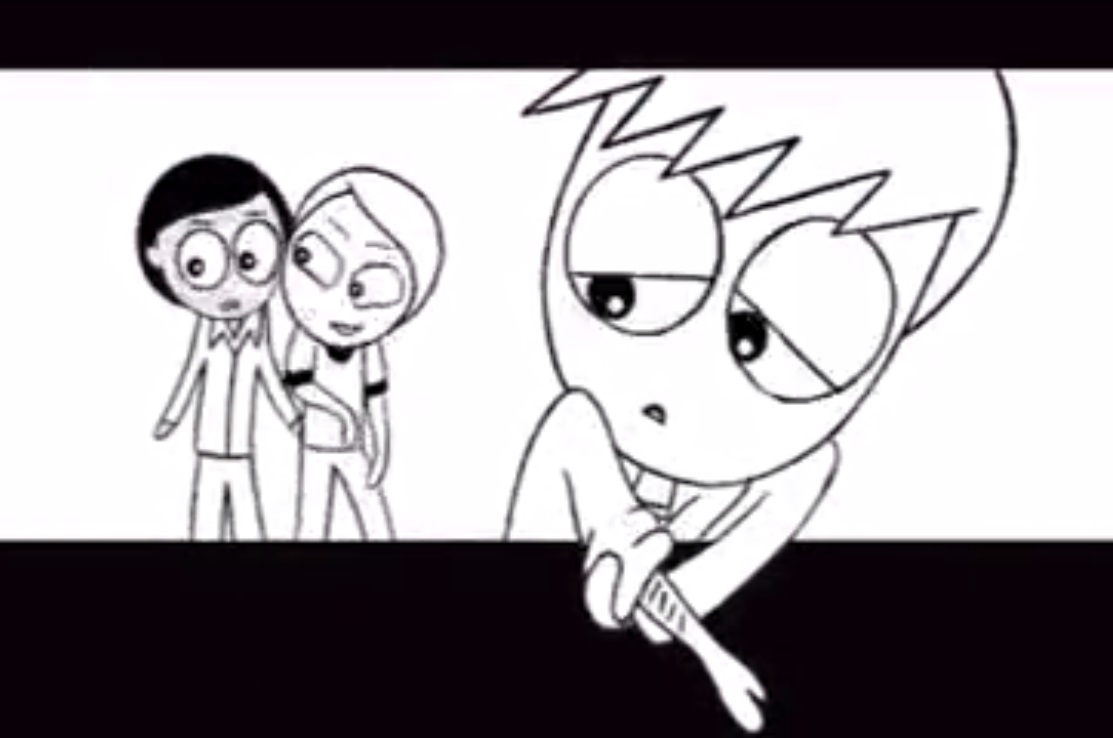 On 26th June I ran a workshop for the second Stigma in Childhood event, at the Scottish Universities Insight Institute at Strathclyde. This was an excellent opportunity to share some of my research on self-harm and young people, and hear from others about their views and experiences of the topic.

Self-harm (in the form of cutting, and overdosing mostly) is widely thought to be an increasing phenomenon among young people, though I would always urge caution when interpreting claims about ‘epidemics’ of self-harm. There is a similarly increasing amount of research addressing self-harm, the majority of which is carried out by clinical researchers working in psychiatry, or psychology. A smaller, but also growing, body of research uses qualitative, social scientific approaches to speak with young people themselves about self-harm. One of my research projects used a range of methods: an online, qualitative survey, interviews, and focus groups, in order to engage young people in Scotland, and further afield, in reflecting on self-harm.

A surprising theme that emerged in first few focus group discussions, and which I followed up in the qualitative survey, was that of ‘attention-seeking’.

Perhaps naively, I had expected that the (negative) phrase ‘attention-seeking’ might have fallen out of fashion, given that self-harm is so widely known and spoken about. Attention seeking had come up in my earlier research (interviews with adults who had self-injured, which I did in 2007-8) but since then information, awareness raising, and anti-stigma campaigns around self-harm have happened. Almost any information site, or leaflet on self-harm will emphasise that ‘it isn’t about attention-seeking’.

At the Stigma in Childhood workshop, I introduced some of the findings that are analysed in the paper, in order to prompt discussion among participants about the ways in which self-harm might be stigmatised. 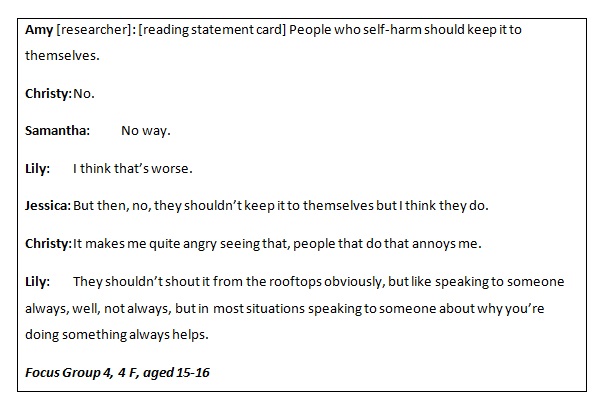 The discussion between Christy, Samantha, Lily and Jessica (all pseudonyms) generated a lot of interesting reflections in the workshops. I argued that Lily’s caution to people not to ‘shout it from the rooftops’ was well-meaning, but quite telling – inadvertently demonstrating that issues like self-harm shouldn’t be spoken of – at least not publicly. However, one workshop participant noted that ‘rooftops are dangerous places’, and suggested Lily was showing ‘care’ towards people who self-harm, helping to keep them safe. This useful point acknowledges that people who self-harm do continue to face stigmatising responses, and that this may shape their ability to talk openly about self-harm.

In my paper, I also reflect on the challenges faced by young people (and indeed anyone) who has self-harmed in a way that leaves visible (sometimes permanent) marks. One of the young people I interviewed, Jay, talked about her discomfort in some contexts with taking off layers of clothing if she was hot – because of an awareness that such an act could be interpreted by others as ‘attention-seeking’. Relatedly, Conrad, who took part in one of the focus group discussions, suggested that people who ‘showed’ their self-harm might be seeking help, rather than attention.

You can find out more about the research with young people here, or take a look at a short animated film, based on the research findings, created by Yasmin (then aged 15), and animator Jim Stirk.

Chandler, A. (2014). A sign that something is wrong? Young people talking about self-harm. CRFR Briefing No. 74. http://www.crfr.ac.uk/assets/SASHwebbriefing.pdf.

*Article is behind a paywall, but anyone wanting a copy who doesn’t have access should feel free to email me directly.

The Scottish Universities Insight Institute supports programmes of knowledge exchange which address and provide insight on substantial issues that face Scotland and the wider world. Our programmes break down disciplinary and organisational barriers in bringing together academics from different backgrounds, policymakers and practitioners. We mobilise existing knowledge in fresh ways through sustained and collaborative focus on a shared issue and aim to support decision makers in all sectors of society in being better informed. Our partner universities are: Aberdeen, Dundee, Edinburgh, Heriot Watt, St Andrews, Strathclyde, and Glasgow School of Art. View all posts by scotinsight

One thought on “Dr. Amy Chandler – Reflecting on stigma, self-harm and young people”